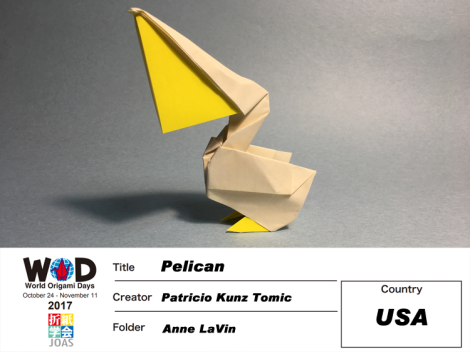 Someone posted a version of this on Facebook, and I was intrigued, so I hunted it up. The piece is diagrammed in “Drawing Origami, Tome 1” by Halle, Pere Olivella, and Nicolas Terry.

Though the text recommends wet-folding (and I think it would be very nice indeed, wet-folded) I didn’t have anything suitable in a white/yellow-or-orange combination, and wasn’t excited about back-coating something, so I thought I’d try it with some regular origami paper. This was folded from some 25cm origami paper, and stood about 15cm tall when finished, and worked surprisingly well from the dry paper. I did find getting the balance very tricky (I must admit that there is a clip for weight in the middle of the body for the photo, to get it to stand.) It is very sensitive to the angle of the feet, plus the combo of the angle of the first fold of the neck, combined with the fold for the head. I’m certain that with some more fiddling – in particular, to keep the feet a bit farther away from the body, and the neck angle a bit more acute than in my example – that it would stand on its own.

Very nice, overall, and I really like the color changes.

It fits beautifully with imagery of the American White Pelican, though I suppose the designer was thinking of the European bird. (Still very similar.) The one in the photo does not have its neck pouch extended, obviously, but there is a nice shot of one at the bottom of the page at Wikipedia, if you’re curious.

This is my fifth fold for World Origami Days 2017. What are you folding?